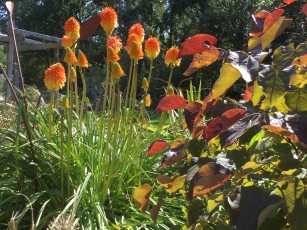 This stunning herbaceous perennials is a close relative of the well known ‘Red Hot Poker’ but this species flowers much later, in England it would normally flower from July into August but here in France it reliably flowers twice each year once in June/July and again during October. This particular plant has only been established for 3 years and had over 15 flower spikes on it in June, now in early October it is starting to produced a second flush of flowers with many more buds to come.

This is not a plant for a small space, measuring up to a metre and a half tall and spreading to over a metre wide it likes a bit of room, preferably in a sunny spot in n

eutral to acid loam or sandy soil and makes a fantastic plant for late summer/early autumn colour in a large herbaceous border.

Cut back the faded flower spikes immediately after the first flowering to get a second flush. The foliage is semi- evergreen and needs a bit of a tidy up in mid to late autumn by cutting back dying or damaged or straggly leaves and again in early spring after any winter damage.

We have young  plants for sale at La Petite Pépinière – come along and see our selection of perennials. Open Saturdays 10-4 until end of October – at other times by prior appointment – you can message us on Facebook or email: lejardincreatif87@gmail.com