Last year our fruit harvest was devastated by a late frost which damaged all of the delicate young developing fruits on our apples, pears and cherries. There were only a handful of walnuts to be had too but this could be due to high winds and/or heavy rain around the time of pollination.

Walnuts are not pollinated by insects like apples and pears but by the wind, therefore 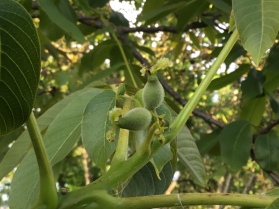 when there is either no wind or too much wind or heavy rain, pollination may be poor. You have probably noticed the large, fat catkins on your walnut trees that have now fallen to the ground. These are the male flowers and produce the pollen. Have you spotted the female flowers that are now fully open?

Walnuts, like many trees, are what is botanically known as ‘monoecious’ this means that they have separate male and female flowers on the same tree (some plants are dioecious where the male and female flowers are on separate plants giving the individual plants a gender). They also have a clever way of avoiding self pollination which is to produce the male flowers before the female ones (known as Protandry) this is why it is best to have several trees growing in close proximity so that it is more likely that there will be pollen around when the female flowers open.

The female ‘flowers’ are not particularly decorative. Because they do not need to attract insects there are no petals, colour or scent, instead they are purely functional consisting of the plump ovary (that will develop into the nut) ad two large and feathery  stigma that are sticky and have evolved to capture as much pollen as possible.

Other monoecious trees include hazel, birch and poplar. A common dioecious tree is holly and this is why you need at least one male and one female variety growing nearby in order to get berries on the female. Watch out though, the cultivars often have confusing names such as ‘Golden King’ which is actually a female variety.

Apples and pears like all fruiting members of the Rosaceae family are hermaphrodite, bearing flowers that possess both male and female organs within  the same structure and are insect pollinated.

Watch out for our basic botany courses coming this autumn to learn more about the fascinating world of plants!